Get Ready for Fall Birding: Hoodies & Sweatshirts for Birders

Fall migration! What a great time to be out in the field. The weather's turning cooler, and birds are on the move. Local breeders are heading south, and birds that spend the summer further north are heading back down to their over-wintering spots. As the birds change, so might a birder's wardrobe. It's time to pull out layers and warmer gear like sweatshirts and hoodies. Get ready for fall birding with a fun new birdwatching-themed sweatshirt or hoodie. Here are some great examples. 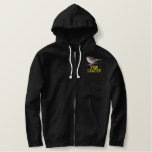 Keep warm while you're out birding with this comfortable black outer garment. The hoodie has an embroidered White-throated Sparrow at the chest "pocket" area. Embroidered text under the bird reads "TRIP LEADER", making this a perfect sweatshirt to wear when you're out leading a birding group. The text is fully customizable so you can change it to read your name, the name of your birding club, or anything else! 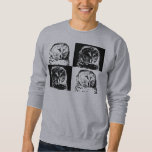 A single image of a Barred Owl face is featured in four black and white blocks. Half of the blocks use inverted tones to make this an artistic look at the iconic and charismatic forest owl. The monochrome photo manipulation art looks great on a grey sweatshirt as featured here. This one is great for birders who love owls (that's probably 99% of birders, I think). 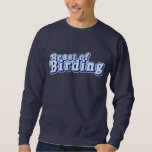 Maybe not all birders can pull this off, but any birder who really loves the hobby should have no qualms about wearing this Beast of Birding sweatshirt. The phrase is a take on "Beast of Burden". Bold text in shades of blue makes the design look like a logo. Get ready for cooler weather birding and pick up this fun and funny birder sweatshirt. 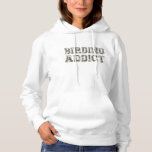 Distressed text in a collegiate style reads simply BIRDING ADDICT. Let other on your field trip know you're the real deal. This bold text design looks great on a white hoodie as shown here. Stay warm and cozy as you fulfill your own personal fanaticism: birding addict! 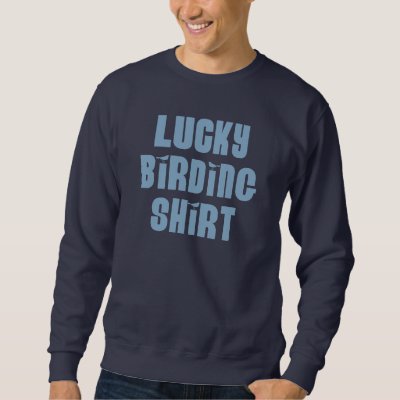 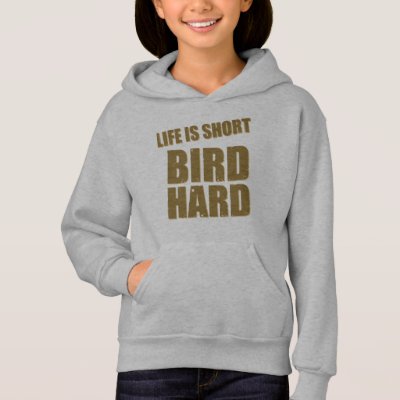 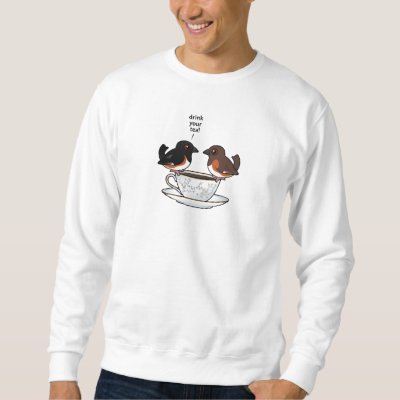 Bird Art Lined Notebook Journals for Back to School

Themed journals like these bird art notebooks are a great way to bring along your passion (birds or birdwatching) as you take class notes or do homework. These notebooks all feature notable fine art of birds by famous artists.

Keep your field notes in a bird-themed journal, or take class notes during ornithology, biology, or ecology using one of these bird notebooks.

Zazzle's great customization tools mean that in addition to these fine bird art prints on journals, you can pick out your favorite species from our range of Historic Bird Illustrations to place on a lined journal. Below are just a sample of the bird art journals available for purchase from our shop. 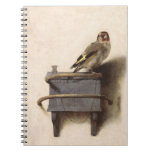 A European Goldfinch sits chained to a perch in this famous painting by Dutch artist Carel Fabritius. The work was featured prominently in the fiction novel The Goldfinch by Donna Tart that came out in 2013. The book was later adapted into a movie. The familiar painting looks great on this small 6.5" by 8.75" lined notebook. A Mute Swan strikes a dramatic pose in this Golden Age animal painting by Dutch artist Jan Asselijn. The life-size painting is striking to see in person; it is part of the collection at the national Dutch museum the Rijksmuseum. The swan is depicted fiercely defending its nest from a dog attack. A detail of the painting is featured on this notebook in the horizontal orientation. 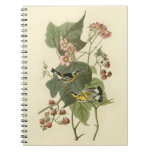 When John James Audubon painted these birds in the early 1800s, he called them Black & Yellow Warblers. Today we call these lovely little birds Magnolia Warblers. Audubon's famous lifelike style looks great on this lined notebook. This blank book would be great for taking notes in ornithology class or other biology classes. 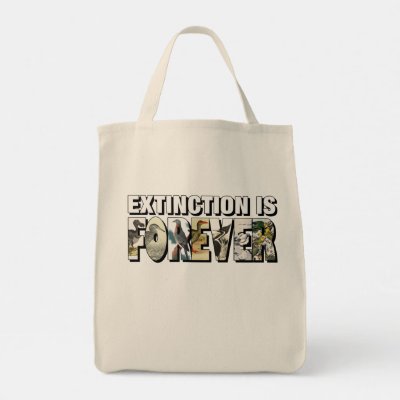 Spread a message of conservation in both action and words with this "Extinction is Forever" reusable grocery tote bag. The message in bold text uses the images of seven extinct species of bird within the letters of "FOREVER".

The birds featured have all be lost to extinction.

We lost the Dodo (in the letter F) in around 1662, when the last plausible sightings were recorded. Both hunting and predation by invasive species led to the demise of the Dodo on its endemic island of Mauritius.

The New Zealand Bittern (in the letter O) was lost as a species in the 1890s. Other names for this lost bird include the New Zealand Little Bittern, and Kaoriki (in the Maori language). As the name indicates, this species was native (and endemic) to New Zealand. This enigmatic species may have been lost to predation by invasive species, a continuing problem for native species of New Zealand.

The last Passenger Pigeon (in the first letter R) was a famous individual, Martha, who died in 1914. This once incredibly abundant species was hunted to extinction. The image used in this tote bag design is taken from a painting by K. Hayashi done in around 1900.

The Rodrigues Rail (in the first letter E) was endemic to the island of Rodrigues in the Indian Ocean. This species was lost to extinction due to excessive hunting, habitat loss, and predation by invasive cats. The species, also known as Leguat's Gelinote, was lost in the mid-18th century.

The last plausible sighting of an Ivory-billed Woodpecker in the United States (in the letter V) was in 1944, in Louisiana. In the early 2000s, there were some claimed sightings in Louisiana and Arkansas, leading to expeditions and further investigations, which yielded no documented observations. While the IUCN may consider the species to be "Critically Endangered", the Ivory-billed Woodpecker is widely accepted to be extinct. Habitat destruction and hunting led to its demise.

The Labrador Duck (in the second letter E) was a small species of North American sea duck that went extinct around 1878. While the cause of its extinction is not fully known, they may have been hunted for their feathers and their eggs may have been over-harvested. Their food sources may also have been impacted by the growing human population around their habitat.

Finally, the Carolina Parakeet (in the second letter R) was North America's only native species of parrot. The colorful bird, once abundant, went extinct in 1918, when the last individual, Incas, died at the Cincinnati Zoo. Loss of habitat due to deforestation and hunting for the feather trade contributed to the loss of the Carolina Parakeet.

Bring along these reminders with you in your daily life. This reusable tote can reduce your own impact on our environment and eliminate the need for single-use plastic bags. Never forget what we have lost with this powerful graphic design.

What A Year to Be An Ohio Birder! Nellie & Nish Delight

Have you been following the amazing story of Nellie and Nish, the Piping Plovers that are nesting at Maumee Bay State Park in Lucas County, Ohio? This intrepid pair is in the middle of a successful nesting season at the park, which is extremely notable as Piping Plovers have not nested in Ohio for over 80 years! The celebrity couple is being monitored each day to ensure their safety and well-being. They have hatched four chicks, much to the delight of birders across Ohio and elsewhere. You can read more about Nellie and Nish, and the incredible volunteer effort that sprang into action once nesting was considered imminent, here: Maumee Bay Piping Plovers. 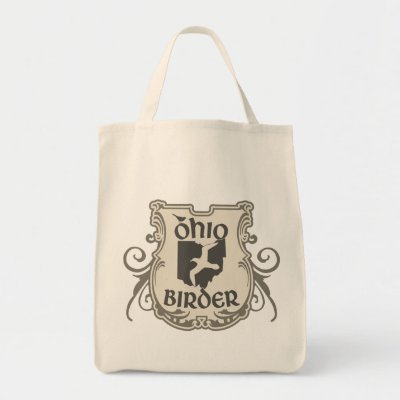 Celebrate Ohio Birder pride with our unique Gothic shield design. Inside the fancy outline you'll find the state in silhouette with a cutout flying gull across the middle. A songbird sits on the first letter O.

Grab this Ohio Birder Tote to contain your field kit -- so you're ready to head out any time, whether you're chasing a local RBA or you're making your next visit to Maumee Bay State Park to check out the local celebrities.

Is your new birding buddy going out with the freshest pair of eyes? Baby's lifelist might be a blank slate, but she can be stylish from the get-go with this cute baby bodysuit made for budding birders. "My First Birding Shirt" is actually a baby onesie. The design includes a young birder looking through binoculars in a simple outdoor scene.

"My First Birding Shirt" makes a great gift for new parents -- this unique design could be a hit at your all-naturalist baby shower or bring it along when you finally get to meet the baby.

Have you heard of Alba, the wildlife adventure game you can play online? Players use a guide book to identify birds and animals, and keep track of all they have observed. The focus is on both exploration and conservation. The game is currently available to play on iOS, macOS, and PC; it will be available on consoles starting June 9th. You can find more about Alba here: Alba: A Wildlife Adventure.

If you're a birder and a gamer, we've got a fun novelty t-shirt for you! Content Rated: Birder is a spoof of the Entertainment Software Rating Board (ESRB) logo system that rates content of video games. In this case, the content (the wearer of the shirt) is rated B for Birder!

Our spoof design in black and white looks great on apparel in different colors or with a simple black or white background. The rectangular design works well on other gift items like phone cases, notebooks, or totes as well.

Shown here on a long sleeve t-shirt, this unique spoof design for birders is available on a wide variety of products -- add Content Rated: Birder to hundreds of different gift and apparel options!